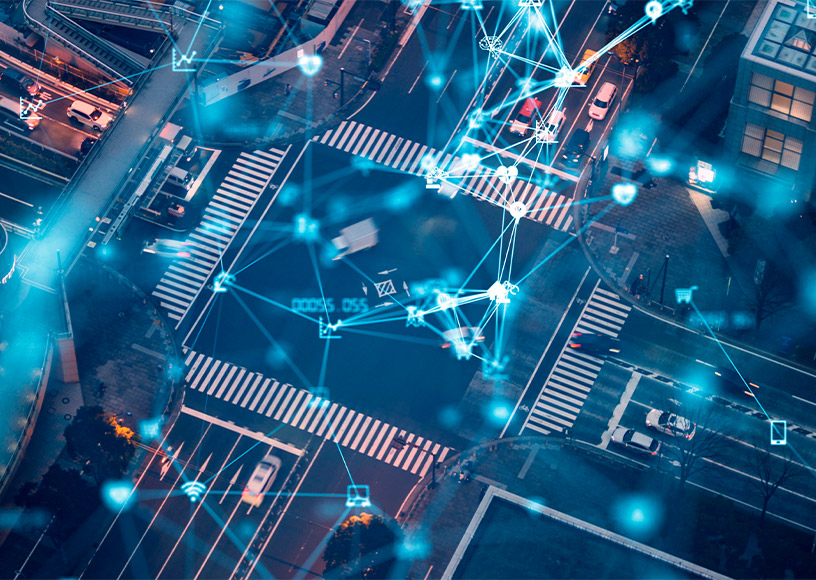 Mobile Ad Hoc Network or MANET is a group of mobile devices, e.g., laptops, mobile phones, radios, or sensors that communicate with each other wirelessly — standard Wi-Fi, cellular, local RF network, etc.—and provides the needed network functionality without an existing fixed structure. They can change locations and reconfigure themselves while doing so. MANETs can be restricted to a local group of wireless devices or they can be connected to the Internet. A VANET (Vehicular Ad Hoc Network) is a MANET that lets vehicles communicate with roadside equipment. Even if the vehicles do not have an Internet connection, the wireless roadside equipment may be connected to the Internet, therefore allowing the vehicles' data to be conveyed over the Internet.

Because of their mobility, reliability, and availability, and with the increase of wireless portable devices, ad hoc networking's applications are many. They include the commercial, military, and private sectors. MANET allows information to be exchanged without regard for geographic location or remoteness of infrastructure.

The History of MANET

In the early 1970s, “packet radio” networks ( PRNET), sponsored by DARPA, were created. PRNET was inspired by ALOHAnet and utilized CSMA methods to provide packet-switched networking to a mobile battlefield in a hostile environment with no infrastructure.

In the 1990s, with the advent of notebooks computers, open source software, and equipment based on RF and infrared, the term “ad hoc networks” was created. The Mobile Ad Hoc Networking (MANET) group was born, along with the effort to standardize routing protocols. A protocol based on collision avoidance which could tolerate hidden terminals was developed.

Although the benefits of MANET are many, there are real challenges to be faced, security being the biggest. The military offers the best example of these challenges.

The military operates in dynamic environments under harsh conditions, but nevertheless needs to transfer ever increasing amounts of information over great distances. A complex system of transceivers, amplifiers, and antennas are required to make this possible. A wide range of frequencies, waveforms, network technologies, and power levels are in play. This complex system presents a heightened need for security to prevent adversaries from locating and targeting ships, planes, vehicles, or personnel, and jamming communications. Operations must also be carried out with limited or no access to strategic communications due to anti-access/area-denial (A2/AD) threats.

Designers of these systems have introduced unmanned systems and autonomous, high-capacity communication bearers that can operate independently in A2/AD environments—decreasing or eliminating some threats from adversaries.

MIMO (Multiple-Input Multiple-Output) is a wireless technology that uses multiple transmitters and receivers to transfer more data over a given time. When applied to a tactical mobile ad hoc network (MANET), MIMO has a high potential to improve data communications, connectivity, and situational awareness. When combined with the self-forming and self-healing advantages of the MANET implementation, these MIMO/MANET systems' ability to operate in A2/AD environments become substantially stronger.

These radio systems are made by Silvus Technologies, DTC, and Microhard, amongst others. Triad RF Systems offers THPR High Power Radio Systems that utilize the Silvus Streamcaster SC4200 and SC4400, the DTC SOLO8, the Microhard 2x2 MIMO pMDDL, and others as a core radio. These fully integrated high-power systems support UHF, L, S and C bands and offer output power levels of up to 100W per channel.

For more information &ndash read the tech brief about the keys to successful naval defense using MIMO/MANET radio system deployments. Naval vessels operate in a dynamic environment requiring a wide array of communication links or off-ship bearers to transport information to or from maritime assets. As more information is transferred over greater distances with many more endpoints, there is a dizzying hodgepodge of transceivers, amplifiers and antennas to contend with. And, near-peer adversaries are continually seeking to target maritime vessels to actively jam communication. These challenges have led to amazing advancements with Mobile-Ad-Hoc Networking (MANET) radios.